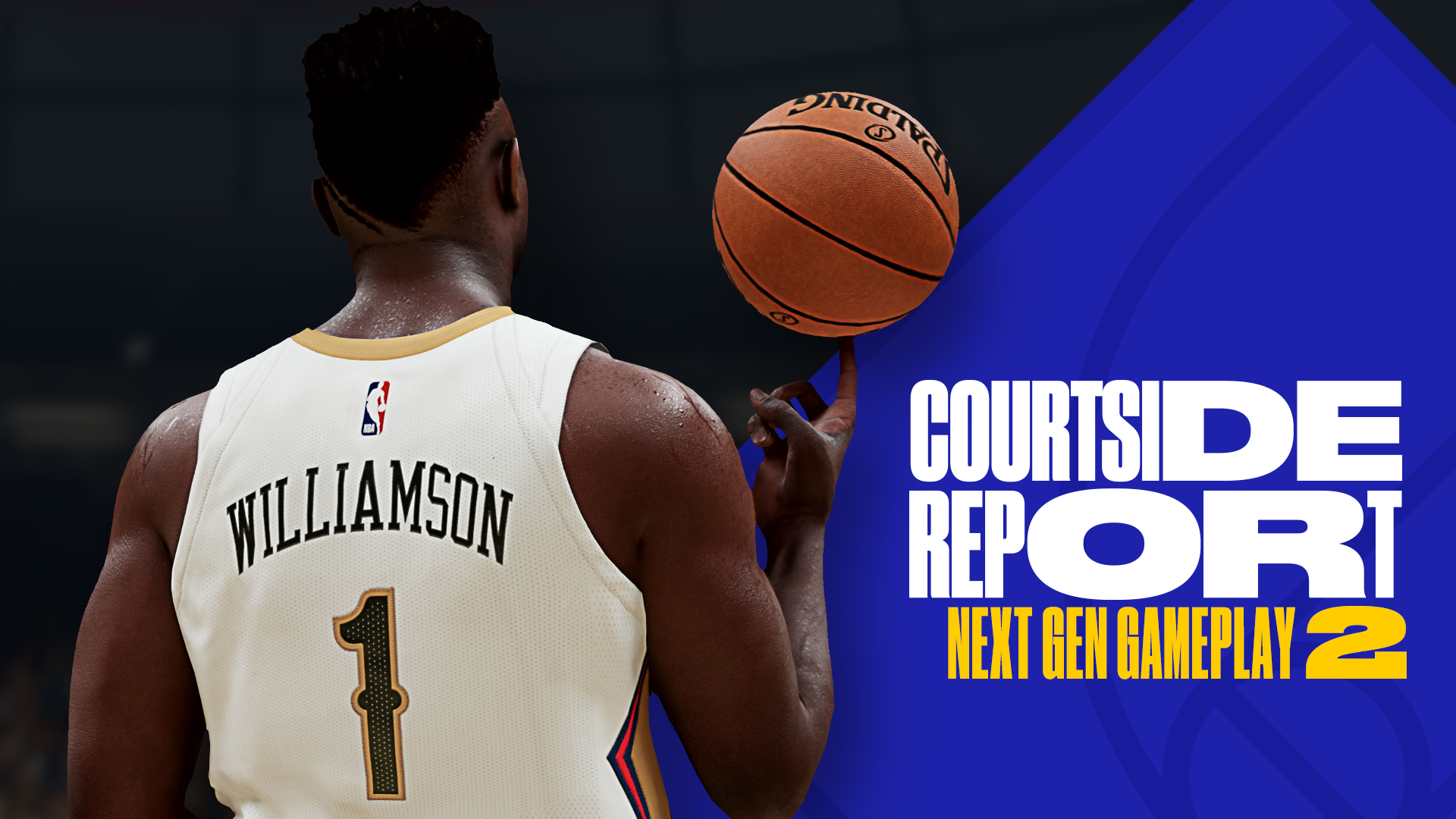 Welcome back to part two of our three-part Courtside Report series on next-gen gameplay! Last week I talked about some of the great additions you can expect to try out with the shooting, dribbling, and passing when you get the game in your hands this November. Today, we’re going to dive into some of the tech that we were able to create to make NBA 2K21 on the PlayStation 5, Xbox Series X, and Xbox Series S truly feel like a next-generation experience.

There’s nothing more exciting for a developer than the arrival of new consoles. Every new generation gives us the opportunity to step back and reimagine how we can push the sports gaming genre forward. If I had to pick one aspect of gameplay that’s probably benefited the most from the jump to next-gen, the answer would probably have to be on-court locomotion. Movement is the foundation for a solid basketball game. When that foundation isn’t solid, a lot of aspects of the game fall apart. We put a lot of resources toward improving locomotion with and without the ball, and I’m excited how far it’s come to kick off year one of the next generation of 2K hoops.

The dribbler was rebuilt from the ground up for next-gen and the difference is night and day. We retained the concept of signature dribble styles that we introduced a couple years ago, but  otherwise, everything was scrapped and re-architected bringing a completely different feel with the ball in your hands for next-gen. Additionally, protect and post movement saw massive upgrades. The aspect of dribble movement that excites me the most is the predictability and consistency of it. It’s much easier to go exactly where you want on the floor, and in the manner that you’d expect to get there. No unwanted turns or having your player face the wrong way. No bursting up to speed or failed cuts. It just works. And because it’s built using the same engine as the Pro Stick dribble move system, movement and moves work cohesively together. Player speeds are more accurate to real life and the sense of weight feels more realistic. It’s a complete package and I don’t think I can overstate how much it’s elevated my enjoyment of playing the game.

All non-dribbling movement from on-ball defense, to off-ball offense and defense is run by our motion engine which is in its third year of development. The motion team has been working tirelessly to bring a next-gen improvement to moving without the ball, and it both looks and feels fantastic. Here are some of the upgrades that stand out:

Sliding in basketball is no good. But it’s something we’ve had to live with in the past because of limitations in technology. I’m happy to say that the next-gen version of NBA 2K21 takes a huge leap in that department. Our engineers re-wrote our foot planting tech from scratch and it led to one of the most striking visual improvements when you compare next-gen to previous generations. Players can now take procedural steps instead of sliding their feet when they need to make micro-adjustments. I love seeing proper footwork as players are making hard cuts, accelerating, stopping… even just standing and making subtle movements in place. It just brings 2K hoops one more step (see what I did there?) closer to real life.

That’s our internal name for all of the interactions between the ball handler and defender. It’s always a tricky balance trying to accurately model the cat & mouse game between the offense and the defense. Our goal with body ups was to highlight the improvements that we were able to make to both dribbling and defensive movement. To that end, it meant less canned interactions and doing a better job of respecting user control. I think the next-gen version of NBA 2K21 strikes a great balance between rewarding taking proper driving angles and respecting contact. Attempting to drive head first directly into a defender will stop them in their tracks, lead to charges, or force pickups. When ball handlers get to the hip of the defender but the defender matches well, it will lead to more realistic rides that neither player will feel stuck in. And on the other extreme, slow footed (or slow to react) defenders will be punished with blow by’s and if they try to force the contact too late, might get hit with a blocking foul. Strong ball handlers can also hard stop out of a ride and crab defenders more effectively so it’s not always about speed when trying to probe into the paint. The logic for the types of resolutions that play out is much more robust and takes into account every little detail you can think of. The end result is a better 1-on-1 game that more accurately mirrors the real NBA.

Just like with body ups, we wanted to translate those same principles off-ball. The motion team completely re-worked the off-ball contact system, which now features everything from “let throughs” (incidental contact) to hard collisions. There’s a great freedom of movement when you’re working away from the ball but also realistic contact when it’s called for, all with no snatching or sliding. My favorite aspect of these collisions can be seen in the new screen interactions. Gone are the “vacuum screens” that have plagued basketball games in the past where defenders would get pulled into a screen collision and run in a direction they weren’t asking for. You can reject screens appropriately, go over or under as you’d expect, and “die” on a screen if you have a weak defender trying to barrel through a big. It all looks great, but more importantly, feels great for both the offense and defense to get the outcomes that make sense in such an important aspect of team basketball.

One of the biggest challenges we face when balancing offense and defense is contact in the paint. As you can tell, with next-gen we really stress the importance of respecting user control and not warping defenders into place for the sake of game balance. But it’s vital to be able to have reliable contact, especially for protecting the basket, in order to prevent bloated points in the paint. For NBA 2K21 next-gen, we developed a new in-air contact shot system that we internally call the Impact Engine. The goal was to completely remove the snatching that we’d been using in past games and resolve collisions on the fly as players hit each other in mid-air. The Impact Engine and next-gen console power gives us the flexibility to do just that. By creating reliable contact when players are in flight, we no longer have to take control of defenders while they’re on the ground and pull them into place just to force certain outcomes. This will be most noticeable for paint defenders as they’ll have the freedom to maneuver their players into position and make a play on the ball themselves rather than the game dictating what happens based on whatever animations happen to trigger. To further aid paint defense, the logic that goes into block targeting was improved and we’re using IK more heavily now to get the hand to track the ball (as well as to minimize clipping.) One of the main beneficiaries of the new engine is that we now have contact alley-oop and putback dunk-ons for the first time in 2K, which look sick and feel rewarding when you can pull them off!

On-ground contact also saw major upgrades, specifically with charge and block fouls. Beating the shooter to the spot and getting set will yield a lot more successful charge calls on the offense while being late will give you more blocking fouls. We’ve also added “crash” layups for the situations where the shooter barrels into the defense but a charge or block aren’t warranted. These animations will help convey to the player that they’re forcing the issue and hopefully teach them to respect paint defenders next time they go inside. If you can’t get around the defense, sometimes it’s better to shoot a floater or pull-up jumper.

Something that always excites us as developers is the introduction of new hardware features that come along with new consoles. When we first heard about the PlayStation 5’s adaptive triggers and haptic feedback, we immediately began brainstorming ways to use them to enhance the gameplay experience. As soon as we got our hands on the dev kits, our lead engineer experimented with several different prototypes to figure out what made the most sense for a basketball game.

For the adaptive triggers, we opted to use them to convey energy/fatigue. As you move around the court, you’ll feel more and more resistance on the Sprint trigger as your player’s energy drains. We also use adaptive resistance in the post game. Strong post players will feel very little resistance on L2 when backing down weaker opponents, but you’ll have to use more force to pull L2 when it’s the other way around. It’s very interesting to play with and helps immerse you into the experience of actually being on the basketball court!

As for haptic feedback, we used it to accentuate our various collision systems. Boxouts, body-up rides, off-ball collisions/deny/rides… basically any situation where players make significant contact will vibrate the controller at various intensities depending on the strength of the players involved and the severity of the impact. It’s so dope to feel the difference in your hands between a grazing bump and hard hit. It’s also a great reinforcement tool to understand when you’re making players work too hard on the court, which could hit their energy/stamina levels and potentially cause wear-and-tear on their bodies with our in-depth injury system.

There’s so much more that happened on the engineering front to raise the bar in building NBA 2K21’s next-gen tech, but these are just the main ones I wanted to bring to your attention for today. New technology is always exciting and I love seeing how advancements in the hardware lead to advancements in the software, which then birth new gameplay features and push the genre forward. Make sure to check out next week’s final gameplay Courtside Report as I reveal details about player builds, badges, takeover, and improvements to AI!