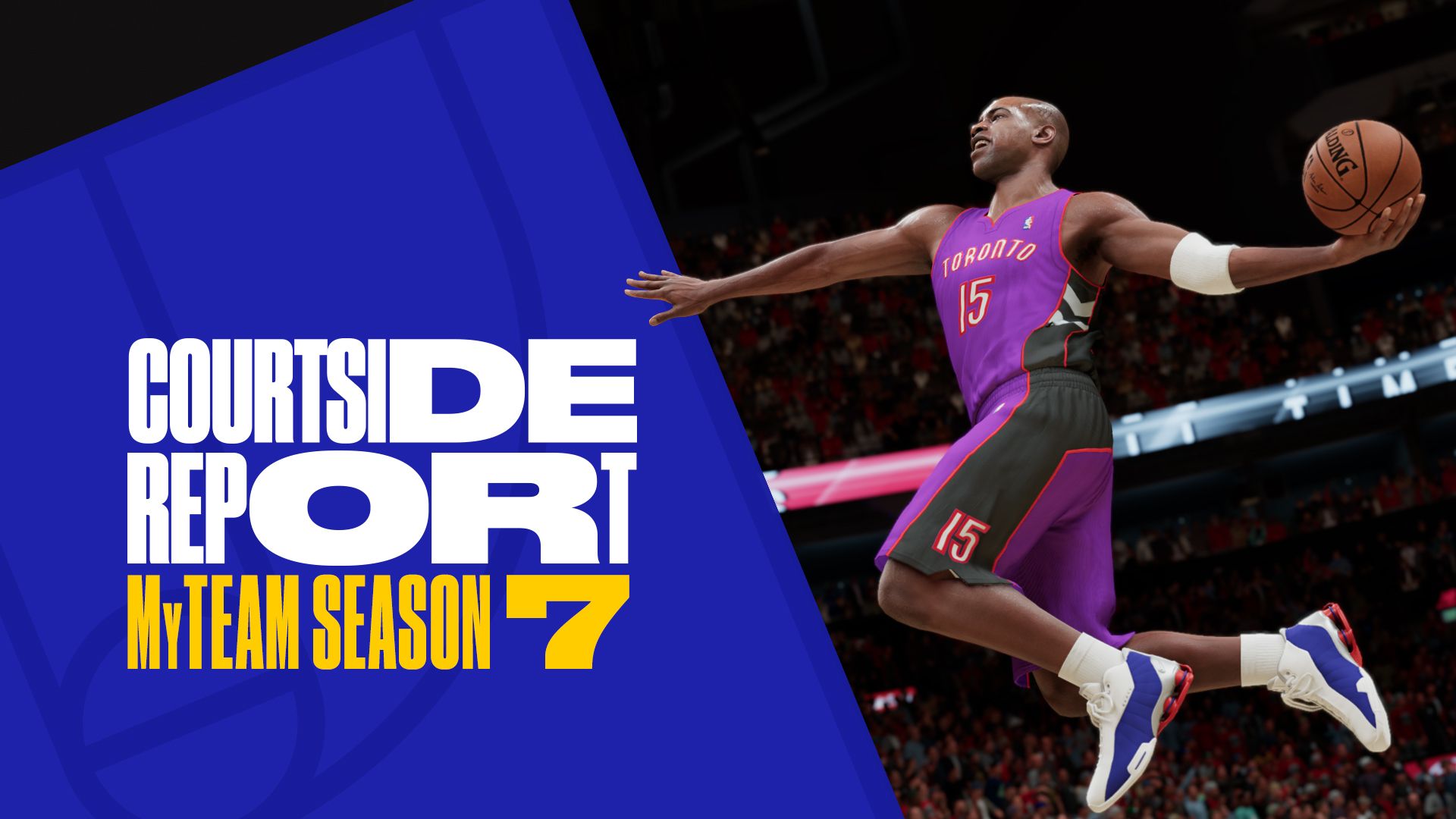 It’s time to go all out in MyTEAM Season 7! This new and unique Season will allow you to earn your way to Level 40 at your own pace, with brand new releases, challenges, rewards, and so much more. Are you ready to go Full Throttle in MyTEAM?

At only 4 weeks in length, Season 7: Full Throttle will be the quickest MyTEAM Season to date. This is a very intense time of year with the NBA regular season ending, the Play-In Tournament, the start of the NBA Playoffs, and, of course, the Basketball Hall of Fame ceremonies.

More on all of that later, but with the shortest season to date, how else are we making Season 7 unique? To start, we are releasing 150,000 XP on Day 1. Meaning there is nothing holding you back from earning your way to Level 40! Additional XP will be released throughout the Season, commemorating moments, accompanying new releases, and getting you closer and closer to our Season 7 Level 40 reward, Dark Matter Vince Carter!

Accompanying Vinsanity, we have even more Dark Matter reward cards for you to earn throughout MyTEAM! For Limited, we are featuring the late-great Elgin Baylor. Pick up this legend after collecting the 4 Rings, one per weekend, after wins in Limited this Season. In Unlimited, earn grandmama, Larry Johnson after going 12-0 in the Galaxy Opal tier. Look for Sidney Moncrief in Ascension, Bailey Howell in Triple Threat Online, and Larry Kenon in the Vault with Jerry Lucas at 1,500 wins in Single Player Triple Threat. Plus, Dark Matter Louie Dampier in The Exchange (alongside Pink Diamond Chris Paul and Diamond Carmelo Anthony!) and a 1,000 card limited release in the Dark Matter Reward Market for Bill Walton.

That did say Reward Market right? Let’s talk Token Market, as it will open to commemorate the newest inductees into the Basketball Hall of Fame! Starting Saturday, head into the Token Market for exclusive packs containing Hall of Fame badges and a few other surprises all week long! Keeping with its namesake, and for our Legend Edition Cover Athlete Kobe Bryant’s upcoming induction, we are giving all MyTEAM players a Hall of Fame badge, everyday, for 8 days; starting on Saturday May 8th. Log in each day to pick up a new Hall of Fame badge for your collection!

Speaking of long-awaited returns, Spotlight Sim will make its return in Season 7. New rewards will include Lifetime Agendas that are tied to the completion of some of the upcoming challenges. What will their rewards be? The final basketball cards required to complete the collections for the Fire Basketball and the brand-new Holographic Basketball! Get ready to experience the Fire Ball for the first time on Next Generation consoles, and witness the new Holographic Ball’s color-bending effects in MyTEAM this season!

This is an intense MyTEAM Season and it is matching the intensity we’re seeing in the NBA right now! With teams preparing for the Play-In Tournament and the NBA Playoffs, we are launching this Season with a new base set, Current Series 3! This new set includes our first-ever Galaxy Opal base cards with Stephen Curry and LeBron James both rated as league-leading Galaxy Opals. You can pick up the new set of cards in League Series 3 Packs & Boxes, or from Premium releases the rest of the year.

A new Season also brings a new Signature Challenge, this time hand-picked from the one and only Tracy McGrady! T-Mac chose his amazing scoring flurry from 2004 against the Spurs, dropping 13 points in just 33 seconds to secure the W! Match his statline, win the game, and earn a Diamond Shoe and yet another Hall of Fame badge to bring your lineup to that next T-Mac level. And if you need a Tracy McGrady card for the challenge, enter this locker code for a Free Agent version to take to the court! T-MAC-13-IN-33

There is even more going into this Season, Daily. To stay on top of everything, I cannot stress enough how important it is to stay connected to our Twitter @NBA2K_MyTEAM, and checking out the MyTEAM segments on 2KTV and in the MyTEAM Community Hub. With all these Agendas, Locker Codes, Season Levels and more waiting, it’s time to go Full Throttle in Season 7 of MyTEAM!