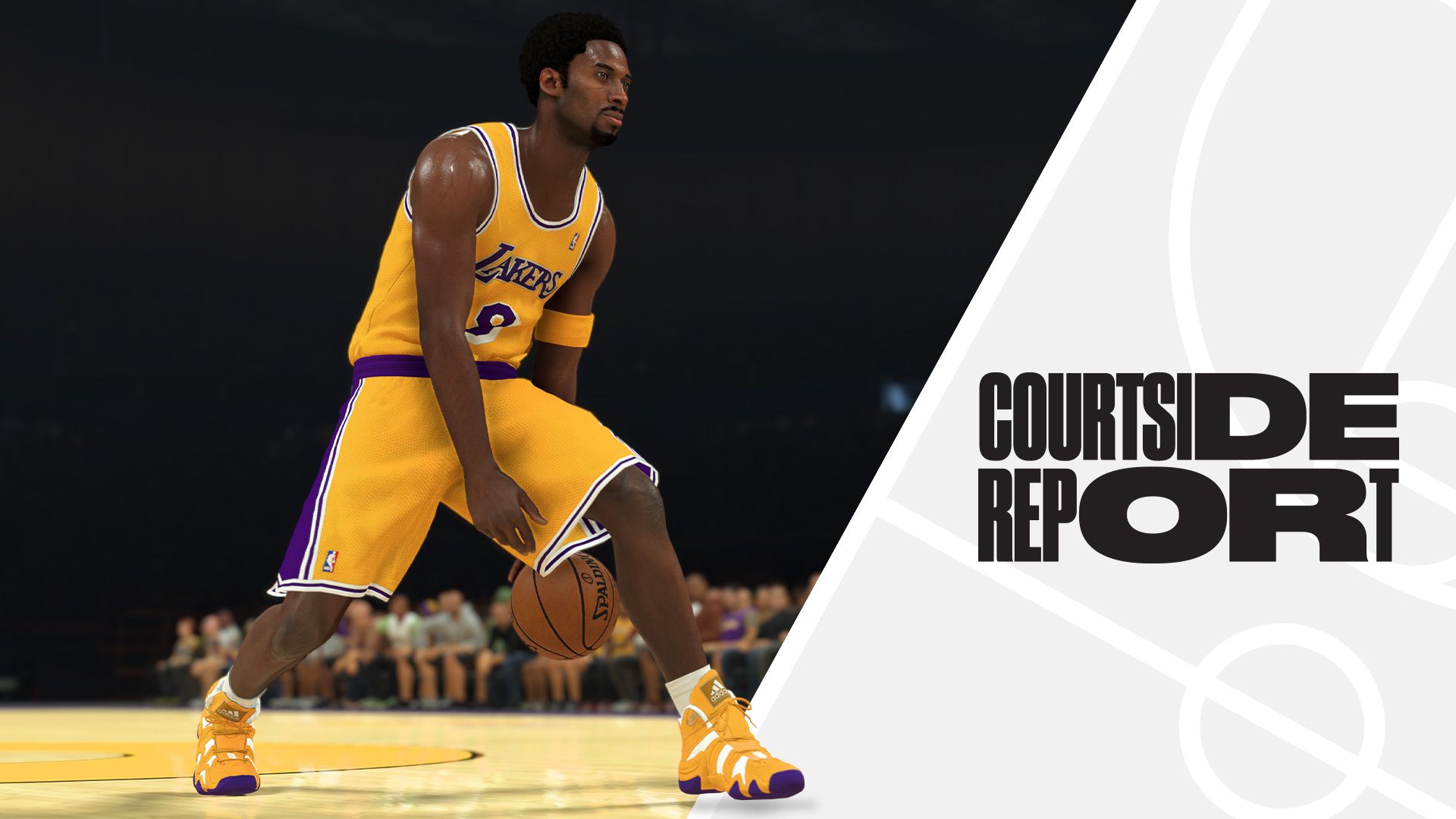 What’s up, 2K community! Well, it has been a rollercoaster year on many fronts, and we know it hasn’t been easy for everyone being cooped up at home with most everything in your life going virtual. Hopefully this short blog will give you something to look forward to in the virtual world as you get ready for a new year of 2K hoops with NBA 2K21! It has been a busy year for us at Visual Concepts as we’ve been working hard to bring you the best hoops experience on both the current and next gen consoles. I can’t tell you how excited the team is to reveal all the new tech and amazing advances we’re bringing to 2K basketball with the power of the next gen systems; but for today, let’s take a look at some of the gameplay improvements coming your way for the current-gen version of NBA 2K21 launching on September 4 for PS4, Xbox One, Switch, Stadia, and PC. Best of all, you'll have the opportunity to check out how the game plays for yourself when we release the NBA 2K21 demo on August 24 for PlayStation 4, Xbox One and Nintendo Switch! 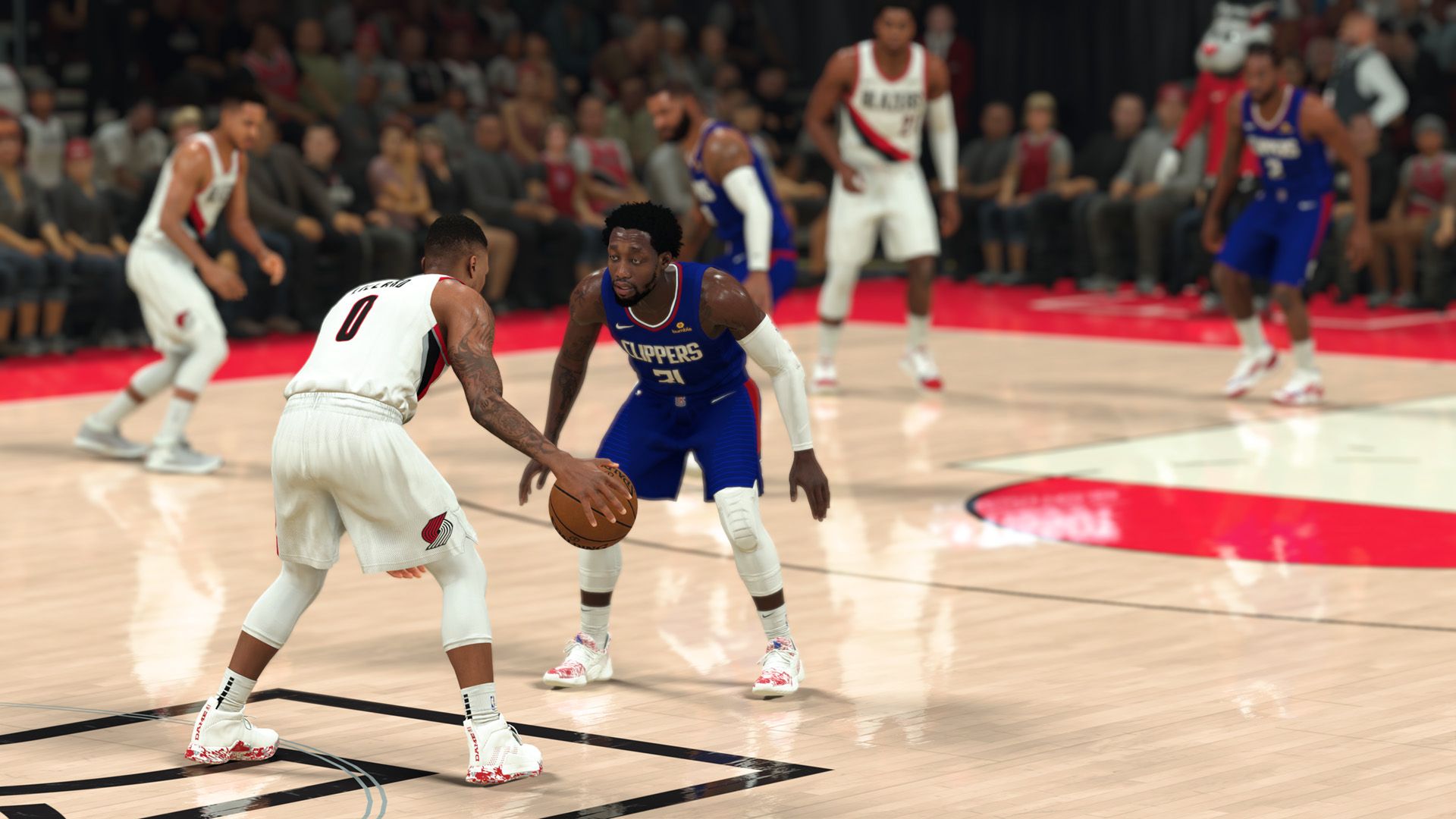 I had the opportunity to jump on a Zoom call with cover athlete, Damian Lillard, a few months back. He is a huge 2K gamer and had a ton of great feedback and ideas for 2K21. But his biggest request? Being able to make an oversized PG in MyCAREER. So, for all you Penny Hardaway wannabes, you have Dame to thank for that as we have upped the max height for PG to 6’8”. Dame continued to share his likes and dislikes of gameplay, which we then added to the running wishlist that we already had from the community. After compiling all the feedback, we came away with a great list of items that we knew the community wanted to see improved (e.g. long passes downcourt sailing out of bounds) and came up with skill-based solutions that would be more fun and fair for everyone.

We’ve always prided ourselves as being the most authentic basketball simulation on the market, and that will never change. But one of the challenges that we face is striking the right balance between simulating real life and making a game that’s fun and enjoyable for a wide range of fans. That’s where the debate on Skill Gap vs. Accessibility comes into play. The target we shoot for is to create a game that’s easy to pick up and play for new users while also providing enough of a skill gap for veteran users to really showcase their talent. One way we set out to accomplish this was through building out a robust set of sliders and carefully mapping the appropriate settings to all the various modes in our game. So whether it’s your first time playing against the CPU in Quick Play, messing around with your buddies in the Park, or battling in a high stakes Ante Up or competitive Pro-Am match, there’s a wide range of gameplay experiences and definitely something for everyone in NBA 2K21.

So to sum up this section, I don’t really have a fancy back of the box marketing name for the work that went into gameplay balance and “fun-ifying” the on-court experience, but I’m pretty confident that longtime fans of 2K basketball will notice the improvements and appreciate what the team was able to accomplish. 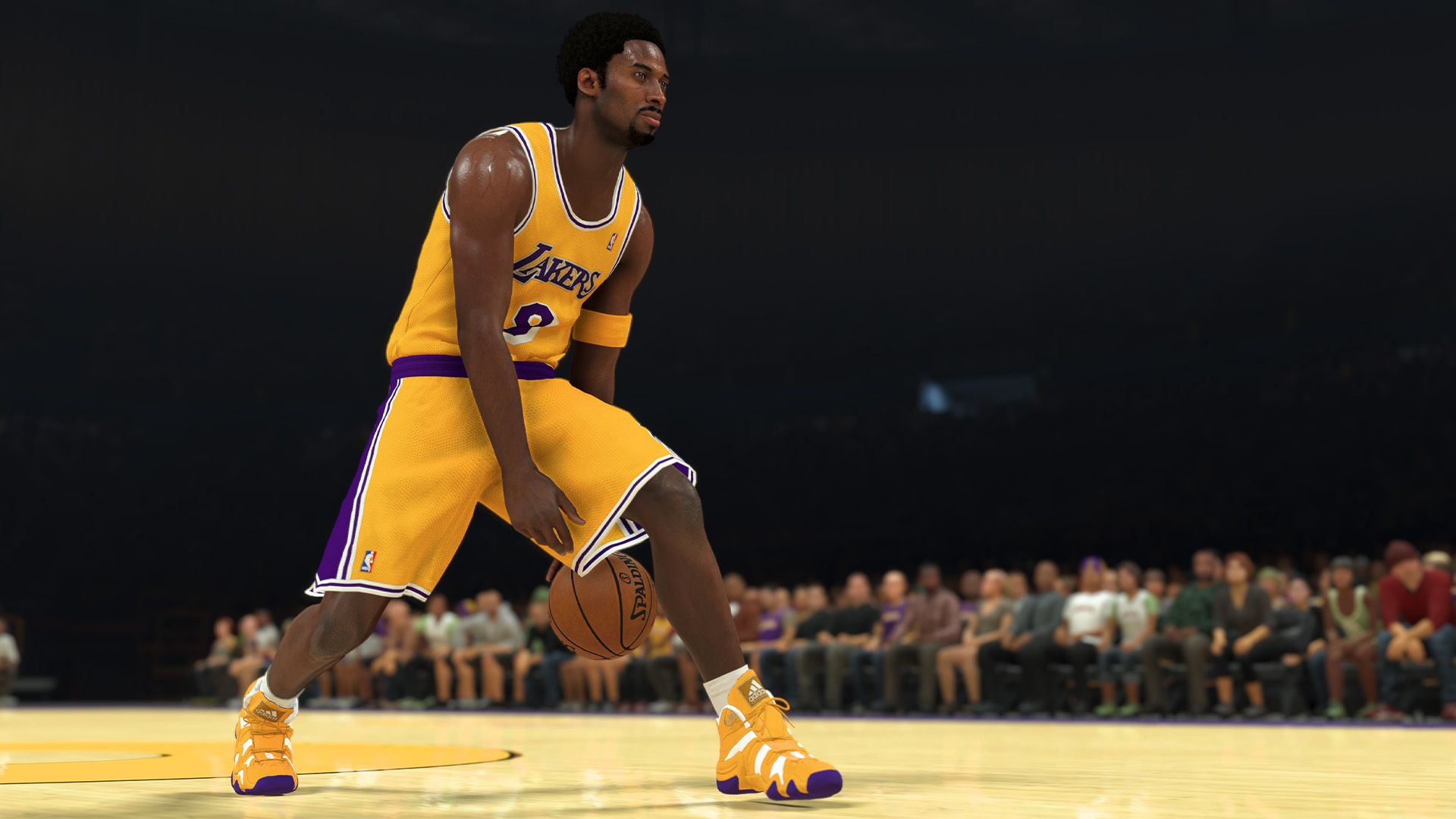 The Pro Stick has been a staple of 2K basketball for years now, and for the most part, has largely gone unchanged since its inception. For NBA 2K21, we saw this as a big opportunity to freshen up the game on the offensive end. In past games, you could hold the Pro Stick in any direction to take a jump shot. That was limiting us from utilizing the right stick as a fully featured dribble stick. So this year, we’re making a pretty significant change to how the Pro Stick works. In a nutshell:

With this change, we’ve been able to greatly expand the dribble move arsenal and give you access to more moves in a more intuitive control scheme. After a game or two, it will feel second nature and will have you breaking ankles in no time! Along with the remap, the moves themselves have been overhauled to be much more responsive and chain-able. Street moves have been moved to a tap of the left trigger as well, so you won’t be firing them off by accident when you’re breaking down defenders in the Park. And for the NBA size-ups, we’ve added several new signatures like Harden’s around the leg dribble, a new version of Kobe’s dance, and Durant’s signature hesi cross. Another NBA legend, Nate Robinson, came in for motion capture this year and gave us some really unique moves that I’ll leave for you to find as well. You can also perform size-up dribbles on the move by holding the Pro Stick Up and using the left stick to move your player in any direction. Altogether, you can choose from a list of 14 Park and 36 unique NBA Size-ups. And when you factor in all the 1-to-1 size-up packages and new customizable escape dribbles, there’s really no limit to the types of combos you can pull off in NBA 2K21. 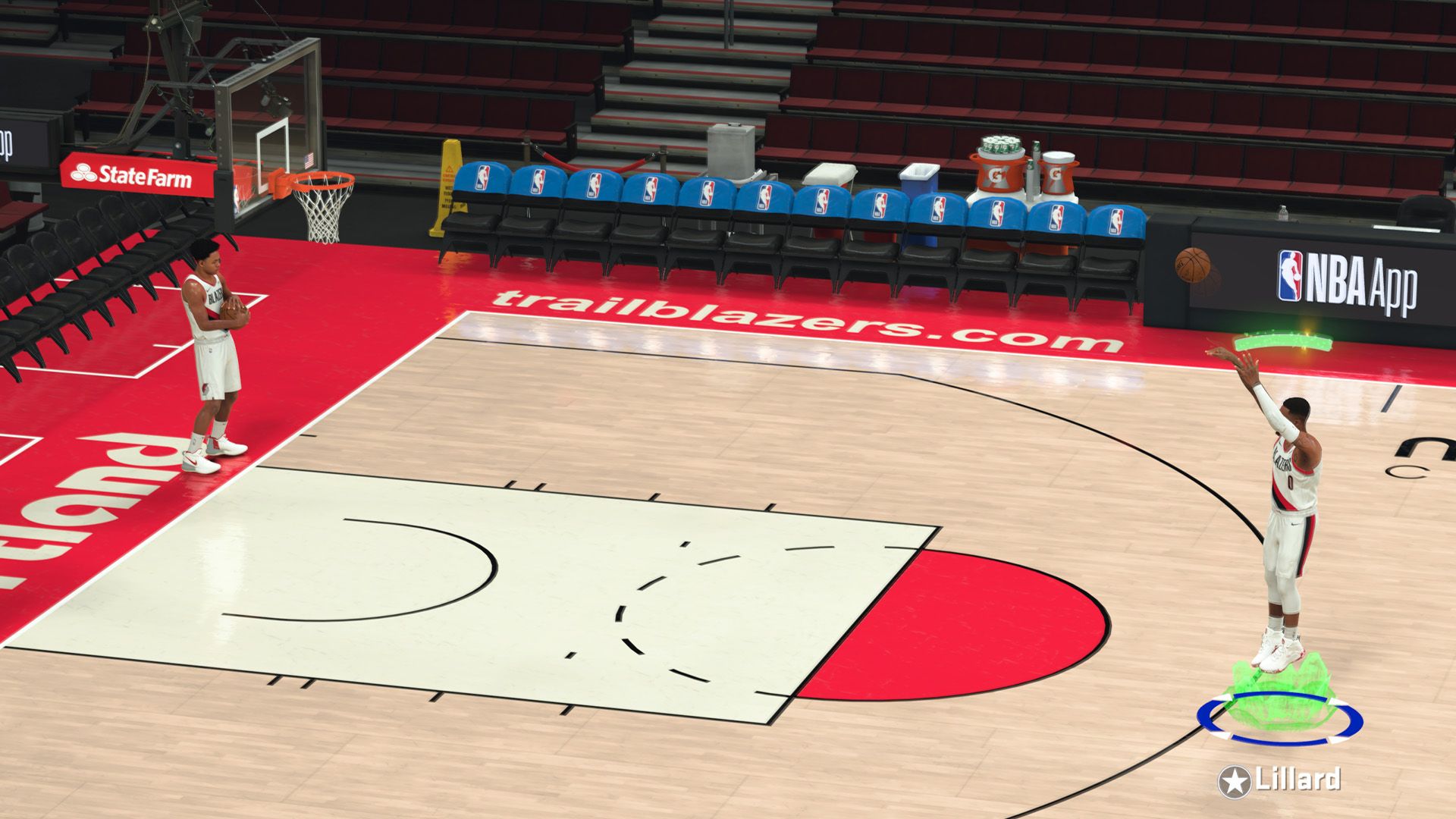 Dribble moves weren’t the only thing that benefited from the Pro Stick upgrade. Jump shooting and finishing at the rim were points of emphasis as well. We really wanted to make scoring the basketball a skill both from the perimeter and at the rim, so we brainstormed and prototyped a number of various shooting mechanics for this year’s game. What we settled on was an idea conceptually similar to something we tried in NBA 2K17… Shot Stick Aiming. Aiming didn’t really work that well in NBA 2K17 because it was a bit buried, didn’t have much skill built into it, and didn’t give the user any feedback. We took those learnings and used them to create a better solution this time around. For NBA 2K21, when you shoot with the Pro Stick, the shot meter changes from a timing bar to a targeting system. So instead of trying to stop the shot meter when you reach the perfect release window, you adjust the Pro Stick in real time to hit the ideal center aim point. The target window resizes dynamically based on player ability, shooting range, and how well the shot is contested and can also shift to the left or right based on the shot’s degree of difficulty. If you miss the target too far to the left or right, your shot will miss in that direction. And as I mentioned above with the new slider sets, even the slightest degree might be the difference between a make and an airball on Hall of Fame, while it’s quite a bit more forgiving on the easier difficulties. You also won’t be penalized for using the entire shooting motion to find the sweet spot. In other words, you don’t have to time your release when you’re shooting with the Pro Stick. But if you want to take it to the next level and know your release, you can lock in your timing and aim by either centering the Pro Stick or by tapping one of the triggers when you reach the apex of the shot. The lock in will be indicated by a brief flash on the shot meter. If you can time AND aim well, you will give yourself the best chances at making the shot. 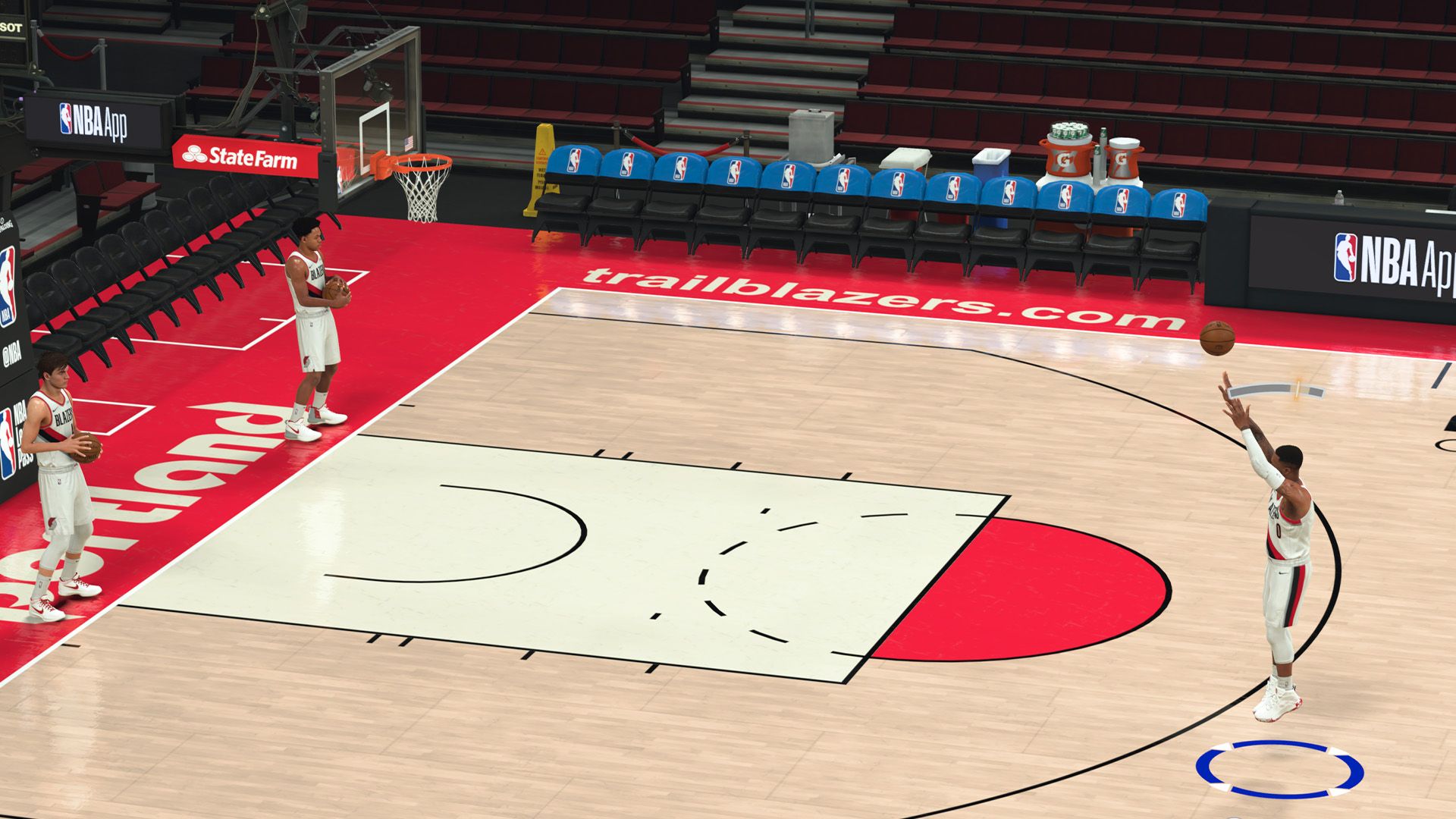 The aiming concept also applies to finishing layups, replicating the idea of having “good touch” around the rim. As you’re driving you can still hold the Pro Stick in any direction to start a layup, but this year, you’ll want to quickly swing the stick to move the aiming tick to the center of the target. Aiming layups well can help overcome shot contests and help you finish through contact. Personally, it has been hard for me to go back to the Shot Button after getting used to Pro Stick shooting. And because shooting with the stick offers a bit more complexity than just holding and releasing a button, it also carries a greater risk/reward. If you can master shooting with the Pro Stick, you’ll have a higher ceiling for getting greens and making tough shots, so I’m pretty sure it’s going to be the shot method of choice for many competitive 2K players. But since I know some will ask… yes, there is an option to disable Shot Aiming if you really want to go back to last year’s controls.

On the shooting animation side, you can expect a plethora of new shot types, including Harden’s unique 1-foot running fadeaway. And a quick note for all the Park players… we’ve added over 40 new Park Jump Shot Landings for you to show off with when you hit from outside.

On the defensive end, you can expect a much stronger presence from bigs in the paint. Block targeting has been improved so it will be easier to send weak shots back and we’ve loaded up more coverage for contact in the paint to slow down overpowered moves like last year’s hop step layup. 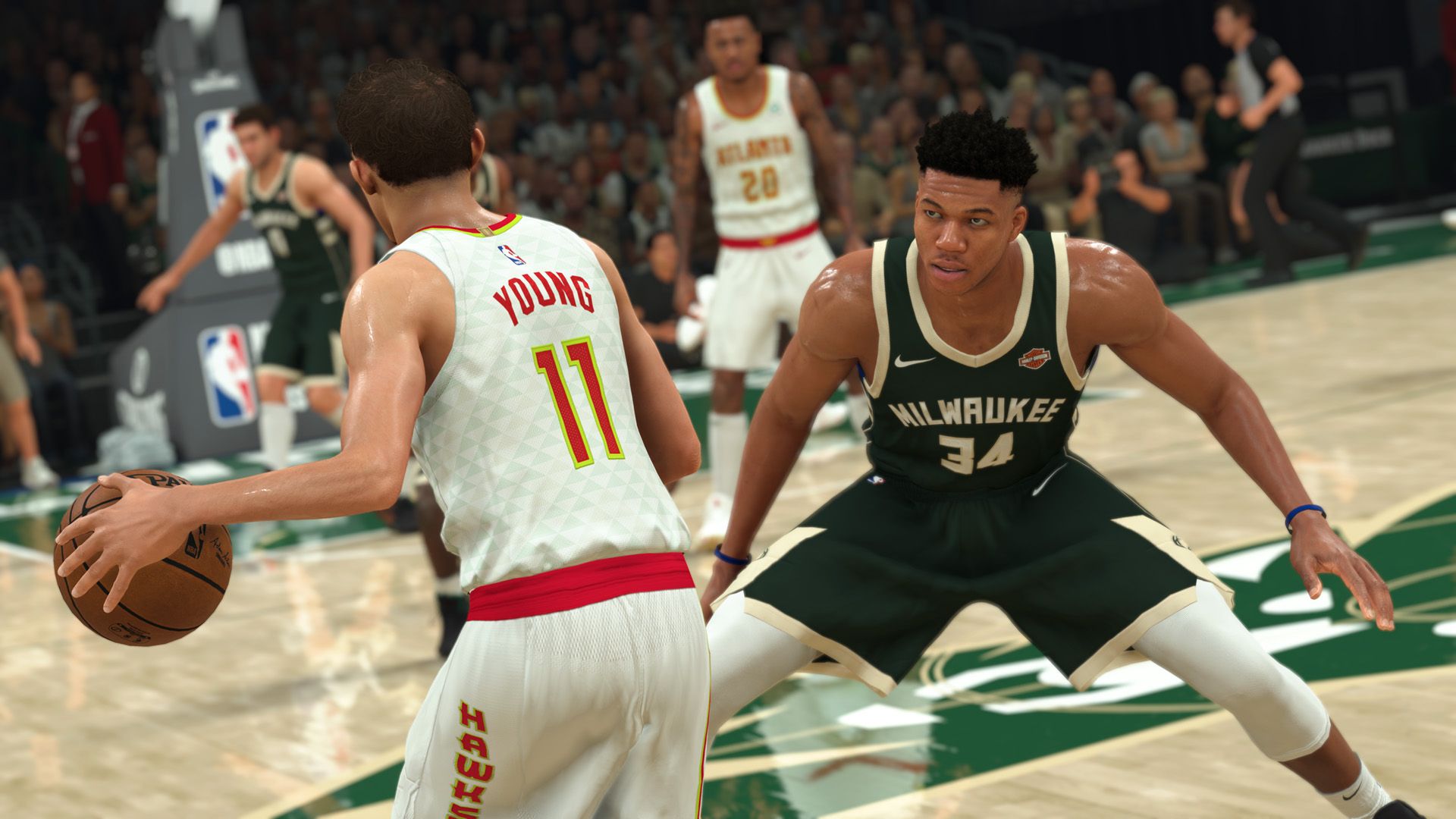 Last year we introduced signature dribble styles, which gave Magic Johnson his unique upcourt waddle, Steve Nash’s finger licks, and much more. This upgrade has now made its way onto the defensive end with signature defensive motion styles. Here’s the list of players you can model your player’s movement after: Russell Westbrook, Giannis Antetokounmpo, LeBron James, Kawhi Leonard, Pat Beverley, Andre Iguodala, and Draymond Green. In addition to this, movement has undergone several refinements, both with the ball and without, to provide a more consistent and responsive feel on the sticks.

Seemed like everybody was a big fan of how we redesigned the badge system last year with the ability to swap badges in and out as you upgrade. That’s returning for NBA 2K21. Throughout the life of NBA 2K20, we collected telemetry data that gave us a detailed breakdown of what badges people were equipping for certain build types, and which ones weren’t being used as much. This was very useful in helping us redesign and tune the badges for NBA 2K21. I think you’ll find that more badges will have merit and fight for a spot in your badge loadout, giving you more effective tools to take over games in a more varied fashion. And here’s some good news that I know the community will appreciate. We removed Quick Draw and put release speed back into the Jump Shot Creator. So that’s one thing you won’t have to waste your precious badge points on.

As always, I want to give a huge shout out to all the gameplay engineers and producers, as well as the talented team at VC South, who worked (and are still working) tirelessly to deliver the best basketball game to date. The current gen versions of NBA 2K21 are a great step forward for virtual hoops, and stay tuned in the coming months for all the goodies we have in store for you on the next gen platforms. The future is very bright for 2K fans, and you won’t want to miss what we’re cooking up for you! But until then, thanks so much to all of you for your ongoing support and feedback year in and year out. NBA 2K has always been a collaboration between the most passionate fans and dedicated developers in the industry, and we couldn’t do what we do without you! Stay safe and healthy, and we’ll see you in the virtual streets! 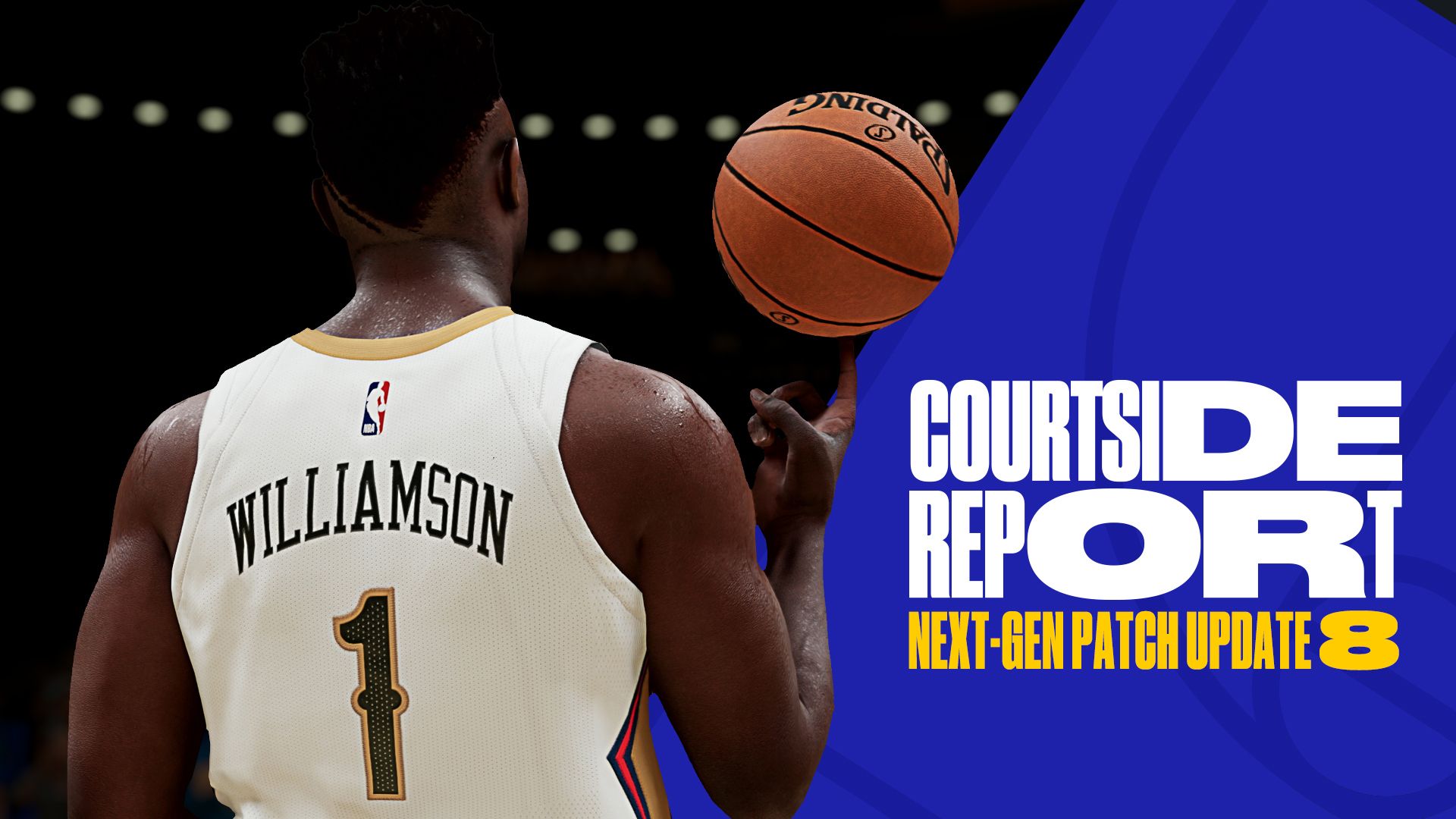